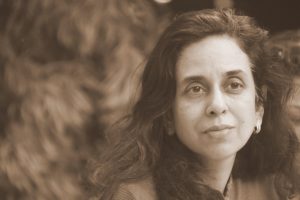 A fine artist and academic of equal parts, Jaya Kanoria is currently enrolled for a PhD at the Department of English, University of Mumbai in the area of drama and Performance Studies, using her Masters in English Literature as a stepping stone. Steeped in Art Theory in the four years since Jaya stopped teaching English to the BA classes at Sophia College, Mumbai, she has explored both her logical and creative sides by continuing to practice as a fine artist and studying art theory at the same time. Her knowledge of art theory, and especially Indian art theory, has literally taken root in the courses she has completed at Jnanapravaha, Mumbai. A para-academic institution located at Fort, Mumbai, Jnanapravaha runs several courses – the year-long “Indian Aesthetics” and “Art, Criticism and Theory”, and the intensive “South East Asian Art and Architecture” and “Yoga and Tantra” as well as “Theoretical Foundations”, the last running over a period of three years. She has completed the first four and attended several modules of the last. Jaya Kanoria visited several great architectural sites of the Indian Subcontinent and South East Asia in the recent past. This exposure has influenced and energized her practice.

“The purpose of my recent work is to return to roots which lie in a fascination with line, drawing and sketching.  My work employs line as its expressive medium and deploys strategies which owe allegiance to the indigenous Alpana (floor design) tradition of Bengal, India, as well as the form of Yantra diagrams from diverse traditions which have been practiced in the Indian subcontinent since the past thousand years and more. It combines folk and traditional forms with fine art practice to produce original and contemporary pieces.  The line, often drawn with a fine nib in ink, sometimes with pencil and charcoal and occasionally with chalk, expresses itself in several forms: as intricate or abstract pattern, as a sweeping direction, as a repetitive stroke which creates a seemingly homogeneous but actually differentiated mass of darkness, as a point which is the unit of every line, an infinite variety of forms which may be straight or curving, creating shape and texture, in a return to drawing and geometry.

The work celebrates a return to the basic tools of pictorial art, tools with which such artistic practices are built.  Through line, the work creates expressive detail, linking visual form, concept, meaning and emotion into a harmonious whole. I draw in order to make an idea mine. In drawing, I am able to find a sense of ownership and control.” – Jaya Kanoria, 2017