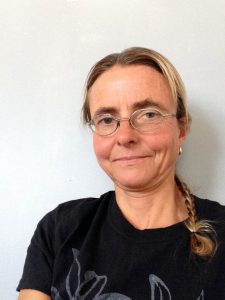 Sonja graduated from the Academy of Art in Stuttgart, Germany and received a Masters degree in New Genres from the San Francisco Art Institute in 2001.

She has been invited to group- and solo- exhibitions worldwide, amongst others: the DePaul Museum in Chicago, Kala Art Institute in Berkeley, Chandra Cerrito Contemporary in Oakland, San Francisco Arts Commission Gallery, Krowswork Gallery in Oakland, RedLine Gallery in Denver, the Peeler Art Center in Greencastle, IL, Saarlaendisches Kuenstlerhaus in Germany, and the Organhaus in Chongqing, China.

She has won numerous artist residency awards, such as the Bemis Center in Omaha, Djerassi in California, the Santa Fe Art Institute, Ucross Foundation in WY, Jentel in WY, VCCA in Virginia, Valparaiso in Spain, Fiskars in Finland, Saari/Kone Foundation in Finland, Taipei Artist Village in Taiwan, and many more.

In fall 2009, Hinrichsen served as visiting artist at the University of North Carolina-Charlotte, where she taught an art/research class culminating in an artist-student exhibition. In summer 2009 she taught a special course for the University of Northern Colorado and PlatteForum Denver to explore innovative ways for educators to incorporate art into their school curriculums. In 2008 she conducted a city exploration project with children from Girls Incorporated in collaboration with the Delaware Center for Contemporary Arts in Wilmington, DE. In 2007 she co-curated “Goldrush,” a traveling exhibition featuring artists from the San Francisco Bay Area at venues in Slovenia, Germany and San Francisco.

Sonja’s ongoing community arts project Snow Drawings has been featured on numerous art, design, culture and environmental websites and blogs, such as the Huffington Post, IGNANT, Spiegel online (Germany), WIRED (US), The Creator’s Project (Germany) and in magazines, including Public Art Review (US), Revolve Magazine (Belgium, environmental magazine), WIRED (Japan), SOMA Magazine (US), TRACCE (Italian Archeology Magazine), MZONE (Chinese Art Magazine), Yellow Scene Magazine (US) and many more. Snow Drawings were included in the book “Designed for the Future, 80 Practical Ideas for a Sustainable World,” by Jared Green and in “INDA 9 – International Drawing Annual,” published by the Manifest Creative Research Gallery and Drawing Center, Cincinnati, OH, and in an in an Environmental Arts Calendar (2014). Among others Snow Drawings has aired on NPR, MSNBC, The Discovery Channel and public TV Tokyo. Photographic prints and video have been shown in exhibitions in California, Colorado and in Europe. Snow Drawings are also featured in elementary school books in Germany and France, as well as the French youth magazine “Le Petit Quotidien”. A print from the Snow Drawings 2013 series (Lake Catamount, CO) was awarded First Prize by the Piedmont Art Center in Piedmont, California.