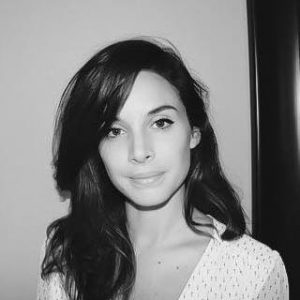 Originally from Merced, California, Alyssa Stanghellini moved to the San Francisco Bay Area in 2013 to further her study of fine art at UC Berkeley. Having graduated in May of 2015, Alyssa is exploring materials, as well as subject matter, to really find her voice in art.

“I only want to make art,and for that art to never lie.

This is a series in which I’ve depicted the parts of my body that an ex has shamed. The titles to these pieces are the words that they said to me. After having graduated from UC Berkeley, I felt lost with my art. I’m trained as an oil painter, and typically have done portraiture in the past and I thought I had to stick to these two things in order to “make it” in the art world. In March of 2016, after almost a year of “fighting” with my art and trying to make my paintings be what I wanted them to be, I finally found a freedom to let a piece evolve “on it’s own”. For example, I will get an idea of a piece that I want to do, but throughout the process of making it, I will allow it the freedom to guide me if the material or the original composition I had planned isn’t working; I will allow my intuition to juristic what needs to be changed.” – Alyssa Stanghellini, 2016