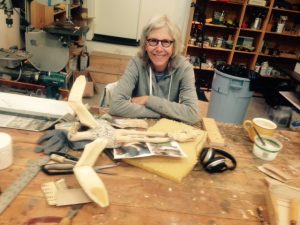 Pamela Blotner is a Bay Area artist, educator and curator. Early in her career, as a Texas state Artist-in-Education, she taught and developed arts curricula for elementary and high school students newly immigrated from Mexico to Corpus Christi and Brownsville Texas. She has worked with refugee artists in Bosnia, Croatia and Burma and in 2007, curated an exhibition of contemporary Burmese art at the U.S. Embassy in Rangoon and later brought a similar exhibition, “We Are Burma,” to Berkeley. Her recent curatorial effort “Envisioning Human Rights” celebrated the 20th Anniversary of UC Berkeley’s Human Rights Center.  The exhibition, held in the School of Law, featured the works of international photographers working with threatened populations throughout the world.

“Menacing Beauty” draws its inspiration from a boat tour I took at sunrise on the Yellow River, a billabong that meanders through Australia’s Kakadu National Park.  As the sun rose, the river’s banks revealed a knotted tapestry of “Paper Bark” trees and towering eucalyptus, their branches alive with sea eagles, spoonbills, and cockatoos.  On the shoreline, Rufus Herons, half hidden in the shadows, wrestled with green snakes, while golden-eyed crocodiles slipped from the shore and dove out of sight.

Why are we drawn to these aloof creatures and untamed places? Do they speak to some lost Eden buried deep in our consciousness?  Or are we awed by the unfolding spectacle of predator and prey?  This exhibition poses these questions while it pays homage to the Earth’s wild spaces and their hidden splendors.