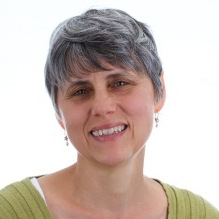 Sarah is a studio potter and California native. She received her BFA in ceramics and sculpture from the California College of the Arts in 1991. Her work has appeared in a variety of publications including Lark Books’ 500 Vases. She has taught workshops throughout California and presented for the Potters Council. She has also participated in numerous exhibitions including the Potters Council Juried Show at NCECA and the California Clay Competition where she received the Quyle Kilns award for functional work. She works out of her studio in Berkeley, California.

My work occupies a two-and-a-half dimensional world, inhabiting the transition between my initial line drawing and its round three-dimensional inspiration. The female figure and classical vase shapes inspire silhouettes. Observing plant life and other flora I allow my intuition to guide the composition of each individual piece. Through drawing and painting I indulge my curiosity while engaging in the reverie and pure joy of seeing something unfold.

Combining controlled slab-built forms with vibrant underglaze surface decoration creates tension and visual excitement in my ceramic surfaces. The pieces serve as both container and canvas, exploring the marriage of surface and form.